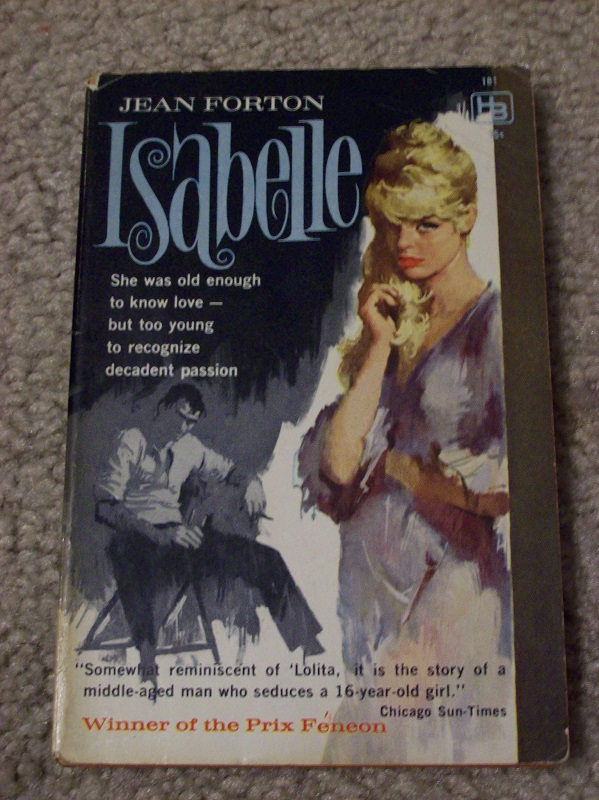 I apologize; I do not have the steadiest hand.

Since this is a book review, this will be slightly spoiler filled, but I will warn you when I am going to directly describe something really important.

Instead of the back of the book having a description, it instead has a quote from the book that gives off the impression that this book will be very risque. The inside of the book has the description instead. 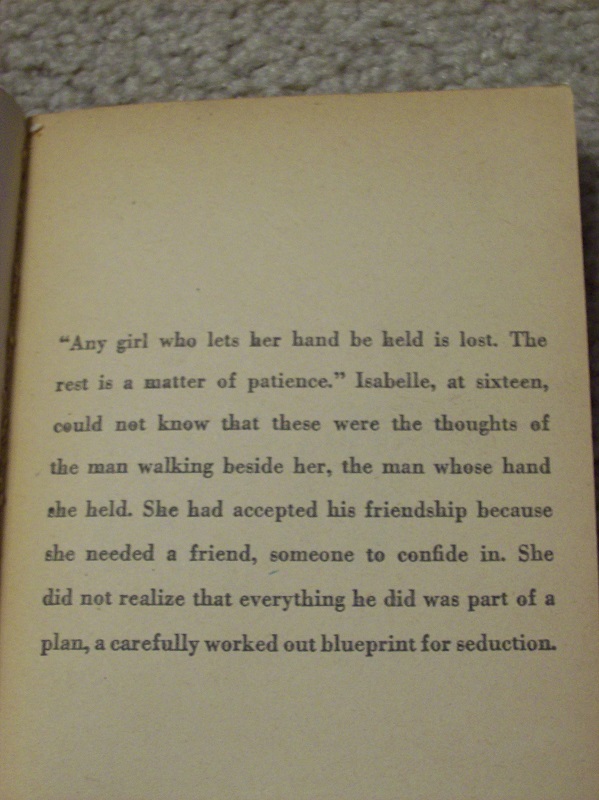 This, this is an accurate description of what the book is. The front cover compares it to Lolita by Vladimir Nabokov. While I have not read Lolita, I have heard that Lolita is more of a tale of a true love that passes the age boundaries. Either way, Isabelle is not that. The comparison to Lolita and the back quote leave a false idea of what the book will be. The inside description highlights the main character’s planning and deduction instead of the romantic aspects of the book.

The book is from the males’ perspective through diary entries he writes. Everything is a later account of what has happened, usually earlier that day. There is no true interaction between the main character and Isabelle until at least 1/3 through the book. 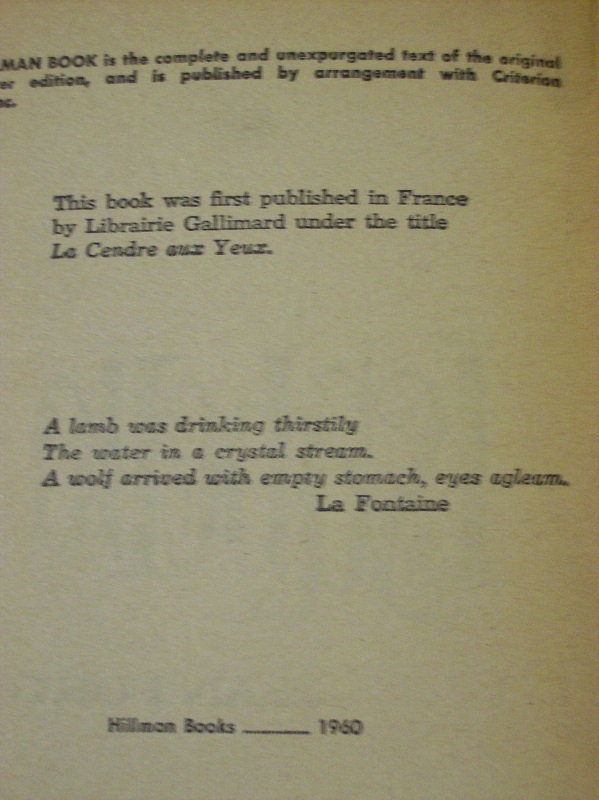 Unfortunately, this quote in the beginning of the book describes the entirety of the book. The beginning of the book is completely the main character’s thoughts on how to eventually wind up having sexual relations with this girl. These thoughts include elaborate plans as to how to meet up with the girl, court her, act polite (as he admitted that he is a naturally curt and blunt person), and eventually make her feel like he is the only person she can confide in and rely on.

Since the whole story is told through his thoughts, we never see how Isabelle feels. It is hard to feel the romance in a story when the main character’s whole goal is to ‘get’ with Isabelle. The back of the book gives you a glimpse of the main characters’ demeanor and his intentions. He is always overall gloomy and seems to have little care for much of anything. He sleeps around with women and is almost adamant about not having an emotional connection and never intended to have an emotional connection with Isabelle once he was able to make her fall in love with him. Even when she says she loves him, he responds falsely, not wanting to get emotion into the relationship.

For a bit, the main character was considering how it would feel to actually have an emotional relationship that could last instead of just flings. However, he quickly decides that Isabelle has so little life experience, that they have nothing in common. How surprising that a 16 year old girl in a sheltered, rich family, has nothing in common with a 35 year old man.

If you have not guessed already, the biggest problem with this book is the main character. He is in no way relatable and is hardly likeable. Occasionally, his snarky thoughts and blunt actions are almost comical but are often so rude that they just seem mean. The main character tore apart a rare stamp his nephew (I believe, it has been a bit) was showing him just for the sole purpose of tearing it. Sure, the kid was a little annoying, but not enough to warrant that.

I was tempted to not finish the book, but I did, and I regret it. The part between the diamonds is basically a summary of the ending of the book so do not read it if you do not want to know how the book ends.

At the end of the book, the main character ‘does it’ with his neighbor’s wife (in his defense, they were in a fight, but still), Isabelle sees, so naturally he thinks the relationship is over. He had been planning on ending the relationship, so it worked in his favor. Isabelle winds up coming back and forgiving him, desperately trying to stay together. He says he does not love her and she threatens to jump out of a window. She winds up not jumping out of the window and leaves. Later that night, she instead jumps off of a bridge and kills herself.

Here is where the books gets me. Remember how the story is written through the main character’s diary entries? His last entry does not feel the least bit sympathetic. He does not seem to realize that he caused her to jump and has learned nothing by the end of the book. The main character even discusses with Isabelle that he thinks that silently falling asleep while drowning would be the best way to die. She killed herself in the manner that he described and he still does not understand that he was the cause of her death.

The main character needs to die alone and probably will given how he views emotional connections.

The translation of the book was really well done, as it was originally in French. They chose to leave in some French phrases while the characters spoke which helped me remember that the book was taking place in France. I think I saw one typo, but it was otherwise fine.

Should you read it?:

While the book took a long time to start, once it got going, the main character’s creepy and obsessive thoughts and plans were interesting to say the least. It felt like you were getting an inside look at the thoughts of a stalker, since that is essentially what he is for the first portion of the book. If you can get through the beginning and learn to accept that the book will always be through the main character’s melancholy view point, then the book is not that bad. His thoughts were sometimes interesting to read, but you can never get over the actions of the main character and the things he says (and his overall creepiness). Plus, the ending of the book was terrible and I was really angry after reading it. If you see the book for cheap (I only paid $1), then go ahead if you do not mind probably hating how the book ends.